JWS Research conducted a survey immediately after the 21st May, 2022 Federal election asking 1,000 voters how they voted, why they voted that way, what information sources and issues were influential, and how they felt about the respective campaigns. Full results and analysis are available to download from the link below.

The survey results were reported by Political Editor Phillip Coorey in the Australian Financial Review: Voters motivated by economy and climate but not by COVID or borders

After the 2022 federal election, voters were asked what pivotal issue influenced their vote the most and many placed climate change and the environment at the top (26%). Nonetheless, despite environmental issues topping many voters’ priorities, more than a third (35%) mentioned economic-related issues such as, the cost of living and inflation (18%), the economy (18%), health (13%), and jobs and wages (8%) as influencing their vote. These drivers varied by party support, with Coalition voters being influenced greater by economic issues, Labor and Greens prioritising environmental issues, and parliamentary integrity the priority among those who voted for minor parties or independents (excluding the Greens).

Timing of votes in this election 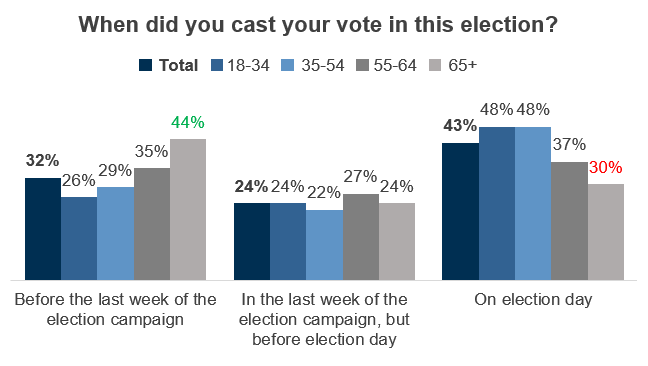 Useful sources of news and information for the election campaign

According to the voters, the most useful sources in this election campaign for staying informed and helping to decide who to vote for were free to air television, both commercial stations (35%) and the ABC and SBS (23%), as well as major newspapers (22%) and online news sites (20%). Conversely, social media sources (18%) such as Facebook, YouTube and Twitter were mainly used by 18-34 year olds (31%) and Greens voters (32%) but were not far behind the major sources of election.

Further, almost three in ten voters (29%) claim to have watched at least one of the televised leader debates. Just over one in ten viewed each individual debate.

This was just a snapshot of the overall survey results – for a detailed look at when, how and why voters made up their minds and cast their votes in the 2022 federal election, download the full report below.