JWS Research sponsored a post election survey asking 1,000 voters how they voted in last Saturday’s Queensland state election, why they voted that way, what information sources were influential, when they made their decision and how they cast their ballot, as well as how they felt about the respective campaigns. Full results and analysis are available to download from the link below.

The survey results were reported by National Affairs Editor Simon Benson in The Weekend Australian: Climate change not a vote issue in Queensland. Analysis reveals that the important vote drivers in the recent election varied significantly by party.

Economic issues were a key vote driver for LNP voters, but did not resonate sufficiently to gain traction against a Government focused on COVID-19 safety.

Among the 1,000 Queensland voters surveyed, 24 per cent say the most important influences of their vote were the economy, jobs and living costs, followed by the COVID-19 pandemic (15 per cent) and the State’s border arrangements in response (14 per cent).

Overall, the environment and climate change (9 per cent), healthcare (8 per cent) and infrastructure (6 per cent) were other key policy areas driving voter decisions at this election.

Nearly one third of Labor voters prioritised COVID-19 (29 per cent) and the related issues of healthcare (18 per cent) and border closures (17 per cent).

Conversely, among Coalition voters, economic issues were a bigger priority; with 37 per cent saying that the economic aspects of the Coalition’s campaign message were resonated most when deciding their vote.

The survey results show the back end of the campaigns still matter, with over one third of Queenslanders deciding their vote within the last week of the campaign. The ‘democracy sausage’ may have had its day though, as only 11 per cent of voters made up their mind on election day, and just 27 per cent actually cast their vote on election day, continuing a trend of declining polling day turnout over recent years. Although COVID-19 social distancing was certainly a factor, convenience was the dominant driver of high levels of postal and pre-poll voting. 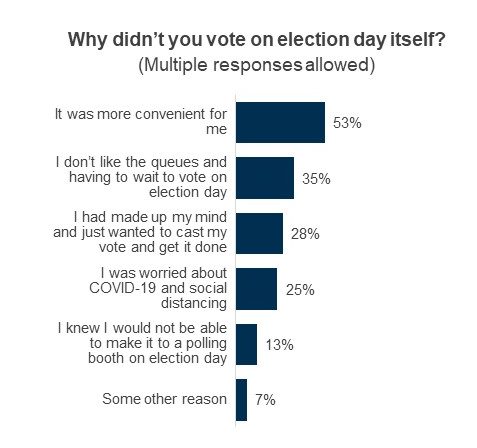 This is just a snapshot of the overall survey results – for a detailed look at when, how and why voters made up their minds and cast their votes in the 2020 Queensland state election, download the full report below.